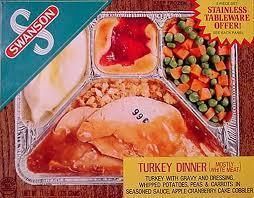 Today’s National TV Dinner Day, September 10,2014 and it looks like it will be one of those evenings tonight as the Greater Oakland County area will see rain and storms this evening (Lets hope power remains on) and who wants to go

grocery shopping or cook during the rain? Although National TV Dinner Day is not a recognized Holiday it is indeed a celebration to some. A new product, called “TV Dinners” was introduced by C.A. Swanson & Sons in 1953.  This changed the prepackaged meal industry forever.  Every year on September 10, we commemorate the “TV Dinner” on National TV Dinner Day or many do. In late 1962 C.A. Swanson & Sons stopped officially calling the meals TV Dinners in hopes to up the image of their product with the term “T.V Brand Frozen Dinner”.

The first Swanson TV Dinner consisted of a Thanksgiving meal of turkey, cornbread dressing, peas and sweet potatoes.  The original tray was made of aluminum and each food item had it’s own compartment.  The dinner had to be heated in the oven and took about 25 minutes to cook. Today most frozen food trays are made of microwaveable safe material. If you can believe this, the original product sold for .98 cents and the production estimate for the first year was 5,000 dinners.  To their surprise, Swanson far exceeded that amount and in the first year, sold more than 10 million of them.

Timeline of a Classic

Much has changed since the original TV Dinner and they also remain a popular choice for a fast and convenient meal and fun to eat in front of the TV!

You might remember the legendary defensive lineman’s Coca-Cola commercial where he tells his biggest fan, “Hey kid, catch!” What you might not remember is the former Pittsburgh Steeler’s commercial in the 1980s promoting Swanson’s new Hungry-Man platter: an extra large frozen platter with an emphasis on the extra meat.

So this evening while enjoying the wet weather share the meaning of today as a day to commemorate a U.S. Classic and possibly eat a T.V. Dinner for dinner tonight.  Also, share with us your favorite frozen dinner of all time, we would love to hear your favorites. Mine is Swanson Macaroni and Cheese.