A quick view of the most influential metrics in Milford, Michigan.

Milford Homes For Sale.The community is also conveniently located close to larger cities like Ann Arbor and Dearborn with their multitude of employment and entertainment options. Notable people that have made Milford home are the actor Dax Shepard, animation writers Matt Wayne and Richard Pursel, poet Thomas Lynch and the actress Mary Jackson.
The history of Milford began with the building of a sawmill on the Huron River in 1832. Elizur and Stanley Ruggles constructed and opened the mill which was soon followed by a grist mill built by Luman Fuller and with this spark of industry a community was born. The first post office was established there in 1834.  A dam built on the Huron River in 1911, which began generating electricity for the area. Due to this power Milford was one  of the first communities in the area to gain electric lights in 1892 one scant year later telephone service arrived in the village. A new period of growth began in 1939 with the arrival of a carburetor plant built by Henry Ford.

According to the 2010 United States Census, Milford was home to 6,175 residents giving the village a population density of 2,541.2 inhabitants per square mile. The 2000 Census revealed that the median household income was $59,688 and the median family income was $71,333. Public education in Milford is provided by the Huron Valley School District. There are three schools in the village, Kurtz Elementary, Johnson Elementary and the Margaret E. Muir Middle School. There are six parks in Milford and one set of trails. Among these gorgeous green spaces is  Central Park, a beautiful 12-acre park in the midst of the community, which is bordered by the Huron River and Pettibone Creek. This park features tennis courts, a pavilion for concerts and a playscape that is popular with children of all ages. Milford trail is perfect for skating, biking, jogging or walking, it is a mile in length and runs between Hubbell Pond Park and the Ford Dam.

The city of Pleasant Ridge is located in Oakland County, Michigan. The city spans almost one square mile and is named after a slight ridge that runs through the community . The city has historic homes, quiet and shady streets and  beautiful park lands. The community had  always been a dry one, but in 2009  the first bar was approved and opened soon after. The community takes pride in its beauty  and safety with residents that participate in community betterment and neighborhood watches. Their efforts help maintain the integrity of the community it for all who live or visit there.

View our selection of available properties in the Milford, Michigan area.

Check out the latest demographic information available for Milford, Michigan.

Get to know Milford, Michigan better with our featured images and videos. 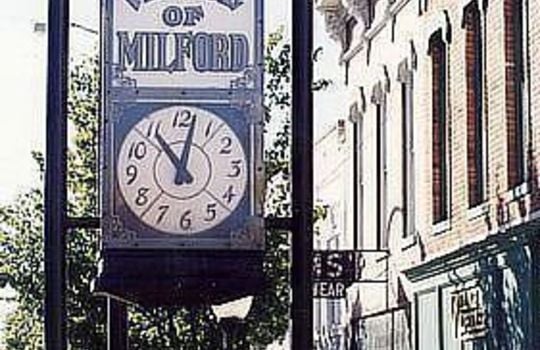 Learn more about schools near Milford, Michigan complete with ratings and contact information.

The Best in Milford, Michigan

Browse through the top rated businesses in the most popular categories Milford, Michigan has to offer.